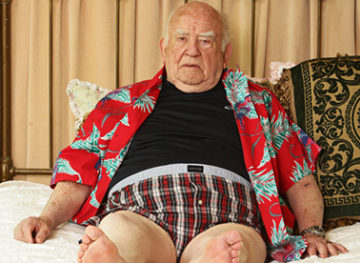 Ed Asner: A Man and his Prostate

TICKETS ON SALE ON WEDNESDAY, AUGUST 7 at 11AM

Another great coup as the legendary Ed Asner, winner of 7 Emmy Awards and known to generations of fans as Lou Grant in the Mary Tyler Moore Show, Santa in Elf and as the voice of Carl in Pixar and Disney’s Up, performs at Strathspey Performing Arts Centre in ‘A Man and His Prostate’.

“It’s got wonderful humor and it’s got truth in it,” Asner says of the play written by Ed Weinberger, who, like Asner, has earned numerous Emmy Awards for his television work. Weinberger wrote for comedy legend Bob Hope, while also plying his craft for stand-up comics Richard Pryor and Dick Gregory. Additionally, Weinberger put his writing skills to work on television for The Tonight Show Starring Johnny Carson, The Dean Martin Show, and Taxi.

Based on a true-life experience, a man discovers his inner self in more ways than one. A near tragedy is masterfully transformed into a one-man comedy, perfectly portrayed by Ed Asner in his hilarious visit to the hospital in preparation for surgery he doesn’t want.

(Friday’s performance is another great show with Ed Asner… God Help Us!)

Can’t decide which show to choose? Buy tickets to both and save! Enter SAVE15 at checkout to save 15% off regular priced tickets when you purchase for both Ed Asner events.