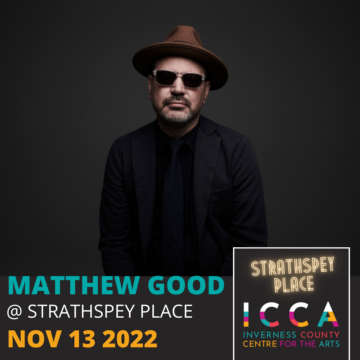 Matthew Good is one of Canada’s most recognizable and relevant recording artists. He began his career as the iconic frontman of The Matthew Good Band, one of the most successful Canadian alternative rock bands during the 1990s and early 2000s, earning multi-platinum sales along with numerous awards and nominations.

Since disbanding in 2002, Good has enjoyed a successful solo career. He has released nine studio albums and has toured extensively throughout Canada, the United States, and the UK. His most recent album, Moving Walls, was released in 2020.

With six Juno Award nominations to his credit as a solo artist- and wins for Rock Album of the Year for 2011’s Vancouver and Video of the Year for 2003’s “Weapon” – Good has never been one to shy away from pushing musical boundaries.

Through his music, Good’s defiant spirit anchors his vulnerable, and at times, cinematic outlook on life. Never one to bite his tongue, his hyper-focused outlook on the world, including political and socio-economic issues, has earned him accolades for his thoughtful and deliberate approach.

LIVE MUSIC AT ICCA IS SUPPORTED BY CANADA HERITAGE