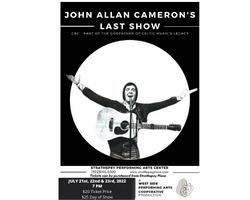 The West Side Performing Arts Cooperative is pleased to present “John Allan Cameron’s Last Show” at Strathspey Performing Arts Centre on November 19th and 20th.  John Allan (Peter MacInnis) will be joined on his CBC stage by a range of well-known Canadian entertainers such as Carroll Baker (Edna MacDonald), Stan Rogers (Rankin MacEachern) and Jerry Holland (Kyle MacDonald). John Allan’s mother, Katie Ann (Jacqueline Boyd), a local character in her own right, will be watching the show from the comfort of her living room in Mabou. A retrospective look back at the legacy of the Godfather of Celtic Music as he blazed the way on stages and TV screens across Canada and the US.